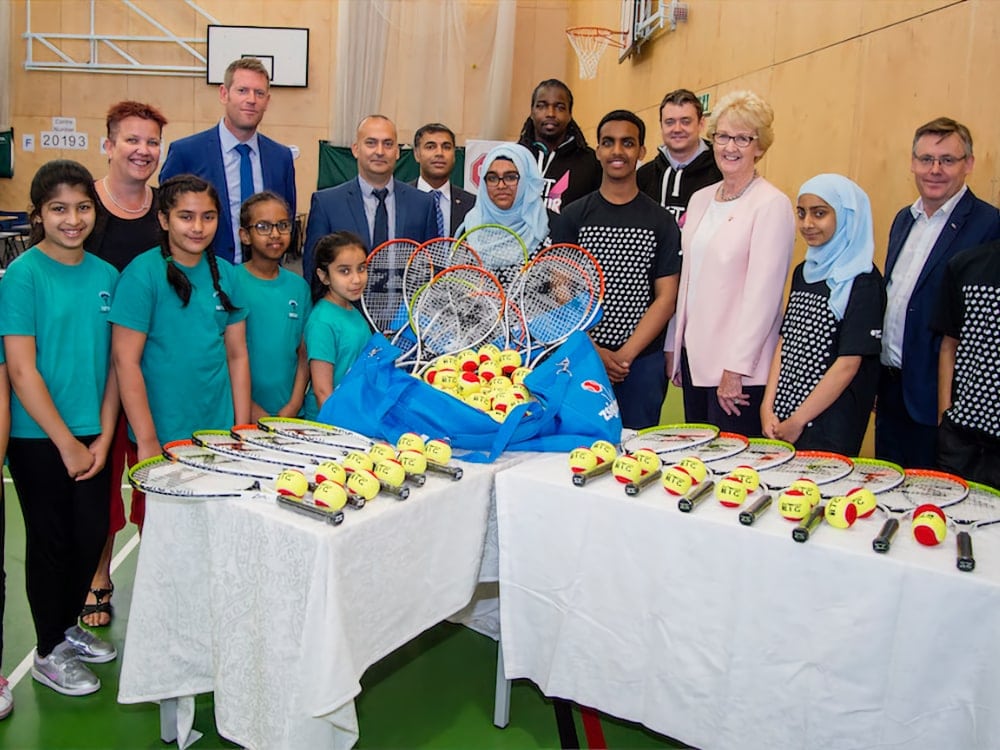 In association with the Lawn Tennis Association (LTA), Qualco UK has launched a tennis equipment lending library in a pioneering scheme that has helped to transform two Birmingham schools.

Qualco was a Gold Tournament Patron for the Aegon Classic Birmingham last week and as part of its corporate social responsibility programme for 2016 it has contributed £1,000 worth of tennis equipment, which is now available on loan to pupils at Rockwood Academy and Nansen Primary School. Qualco also made tickets available for the Aegon Classic to local groups to inspire the local community to play the sport through the experience of watching world-class tennis.

The kit, which students can borrow to use to play tennis in their own time at home or in their local park with their families, was unveiled on Thursday (16th June) at the two schools during a visit by the Qualco team and the LTA’s President Cathie Sabin.

The initiative, by leading charity the Tennis Foundation, aims to radically change the way tennis is delivered in schools – making it more relevant and engaging for children from all backgrounds while also attempting to rid it of its elitist image.

In April, education watchdog Ofsted credited this partnership with the Tennis Foundation and the LTA as being among the “pioneering” work which has helped to remove Rockwood Academy and Nansen Primary from special measures. Both schools have now been deemed by Ofsted as ‘good’ – the best rating Nansen has achieved in its entire 90-year history.

Christian Jacob, Managing Director at Qualco UK said, “We are delighted to have been involved in this initiative. It has been great fun to go into the school and meet the students who will benefit from the new lending library particularly as it was their idea initially. We hope that the local community is inspired to play more tennis, more often!”

LTA President Cathie Sabin said: “This tennis programme is a true example of the transformative power of sport offering students the opportunity not just to play tennis at school but develop a whole range of life affirming skills. The School of Tennis initiative aims to transform how tennis is delivered in schools. At Rockwood Academy and Nansen Primary they are using the programme to broaden the horizons of their students and to provide access to a range of experiences beyond their local community.

“The tennis programme will also enable the students to gain access to and expertise in tennis and offer a range of leadership and enrichment opportunities for students. I was thrilled to be able to visit both schools to see the programme in action!”